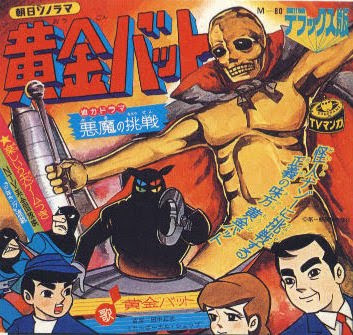 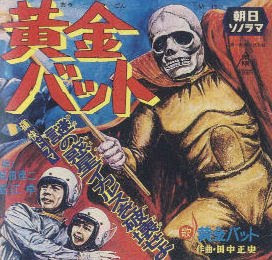 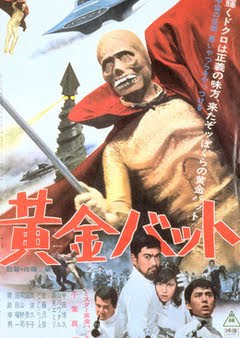 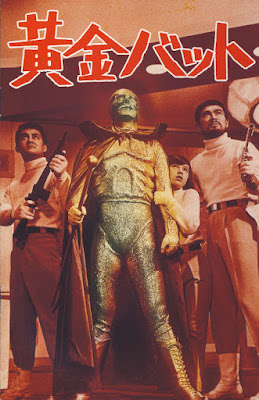 Originally appearing in pulp novels and kamishibai (storytelling using pictures on illustration boards) in the early 30’s, OGON BAT [黄金バット] (GOLDEN BAT) was one of Japan’s very first super heroes. Kamishibai storytellers road from town to town on bicycles, with a small stage, in which they used to present their story picture boards. The stories had continuity from the previous visits, like TV episodes. Kids who bought candy from the storyteller got to sit in front to here stories like Ogon Bat or ninja stories. Ogon Bat is a caped super hero with a gold skull head, who was the protector Atlantis in ancient times. The golden faced savior had a long history before becoming a TV and movie icon with several different designs and variations all with a creepy skull head.
In 1966 Toei Co. produced a 73 minute letterboxed, black and white theatrical feature of Ogon Bat. The film starred martial arts legend Sonny Chiba (INVASION OF THE NEPTUNE MEN, TERROR FROM BENEATH THE SEA, THE STREET FIGHTER) early in his career. Another surprise casting was CAPTAIN ULTRA’s Hirohisa Nakata in his first role one year before the famed Sci-Fi TV series.

The story begins when boy named Akira discovers a planet known as Icarus is headed straight for Earth in GORATH fashion. Akira is taken away by some “men in black” to an United Nations secret science lab, Pearl Research, where he meets Dr. Yamatone (Sonny Chiba) and is filled in on the extremity of the situation. The planet Icarus is on a crash course towards Earth. Luckily Dr. Pearl (Andre Hughes) (KING KONG ESCAPES, DESTROY ALL MONSTERS), invented a powerful ray cannon to take care of this situation. All it needs is a rather large diamond to fire it. Dr Yamatone, Akira, Dr. Pearl, his granddaughter Emily (Emily Takami) (KAMEN RIDER VS. SHOCKER, KAMEN RIDER VS. AMBASSADOR HELL), and some lab members head to an island, where they react to a distress call from some of their members who were searching for a diamond. Apparently they discovered a resurfaced Atlantis. When they arrive they are attacked by a giant drill shaped ship that shoots laser beams at them, forcing the team into a cave. The attacker turns out to be an alien called Nazo, who of course wants to rule the Earth, but threatens destruction by sending Icarus our way. In the cave Yamatone and the crew find a sarcophagus that looks like King Tut’s resting place. They open the coffin and find an unusual looking being, Ogon Bat inside of it, but in a dormant state. The old hero is holding the giant diamond they need. Suddenly the alien invaders storm in and try to get the gem from them. Emily revives Ogon Bat by pouring some water from a small fountain of youth-like reservoir on him. Jumping into action Ogon Bat chases off the invaders using a laser firing baton, all while bellowing out the laugh of laughs WA HA HA HA HA HA!!!! Will Ogon Bat be able to stop the evil forces of Nazo? Can Yamatone get the cannon ready in time to destroy Icarus and save Earth from doom? Oh yeah, wait til you see Nazo’s goofy henchmen. Pure fun!!!

Ogon Bat is possibly the original anti-hero. You get a ghoulish skull faced being from the past, laughing while he kicks your ass and he’s a good guy, cool. Oh yeah, ol’ Ogon comes with a great theme song, which you hear several times throughout the whole film too. This is Japanese science fiction at it's best. Yet another gem that didn't make it to the states, for our Saturday afternoon viewing. One thing that came to mind was a similar origin was used in 1999's KAMEN RIDER KUUGA, but instead of the ancient hero coming to life out of the sarcophagus, they just use his Henshin Belt to become the hero. A year later Daichi-Doga (YOKAI NINGEN BEM) produced a 52 episode color animated series of Ogon Bat, which was done really well. 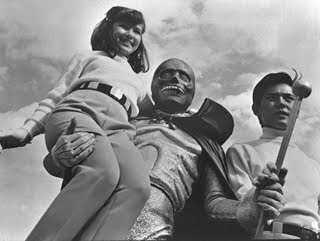 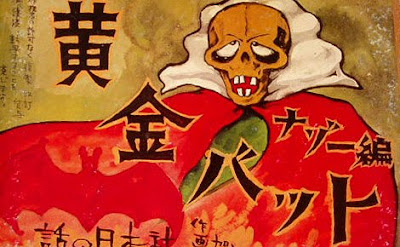 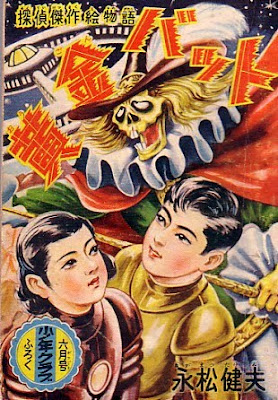 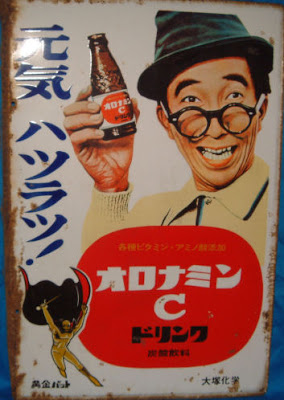 I'll have the song up hopefully later today, the music server is down.
Posted by Shonen King at 10:51 AM