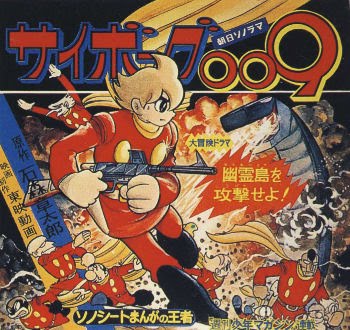 Quite a few black and white anime/cartoon TV series (ASTRO BOY, GIGANTOR, PRINCE PLANET, EIGHTH MAN, etc.) have made it to the US airwaves in the 60’s and 70’s. Unfortunately, a lot of classics never made it here that could have been huge hits if they had been dubbed for the US market. One such TV series was Toei Production’s action packed sci-fi adventure Cyborg 009. Originally a manga/comic series which began in 1964, created by legendary artist Shotaro Ishinomori (KAMEN RIDER, JINZO NINGEN KIKAIDER, INAZUMAN). Ishinomori got his start working along side Osamu Tezuka (ASTROBOY, KIMBA, UNICO), after winning an art contest. 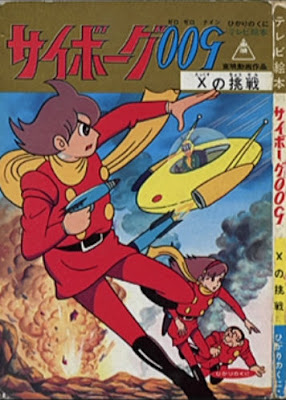 Cyborg 009 was published in Weekly Shonen King magazine and Weekly Shonen Magazine, then later chapters appeared in other publications. Ishinomori’s Cyborg 009 was cutting edge and ahead of it’s time, with stories reflecting shocking and sometimes chilling issues of the 1960’s such as racism, corporate business, and weapons of mass destruction, among others. Cyborg 009 was the first super powered hero team ever from Japan, which was the prelude to the future SUPER SENTAI series, also started by Ishinomori with HIMITSU SENTAI GORANGER. 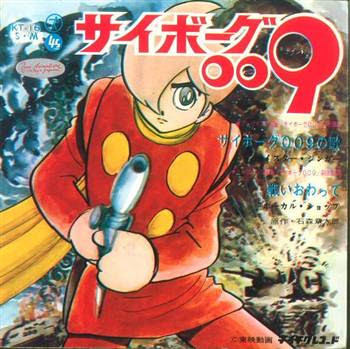 Cyborg 009 tells the story of nine cybernetic super-charged humans created to be the next stage of the arms race. The evil organization Black Ghost, with their leader Skull, profit from global fear with the sale of military weaponry. They plan to sell the world powers the new super soldiers who’ll now be able to take war into space. Resenting what Black Ghost had done to their lives and bodies, the nine 00 series Cyborgs, who still have souls and a conscience, rebel against their warmonger creators. Realizing the threat the 00 Cyborgs are to their plans, Black Ghost unleashes armies of soldiers, tanks, robots, even cybernetic dinosaurs to try and stop them. Along with their new abilities, each Cyborg has a cool laser blaster which shoots lightning-like bolts of electricty to battle off these menaces. Joining the Cyborgs, Dr. Gilmore, a Black Ghost scientist, turns his back on his corrupt employer, instead he aids and advises the 00 Cyborgs. The unique thing about Cyborg 009, was that the heroes represented all walks of life, emphasizing on color, race, and upbringing. Yet they were all different they still came together as a team to fight the world menace. There were a lot of messages woven into each storyline that even today plagues our news headlines. 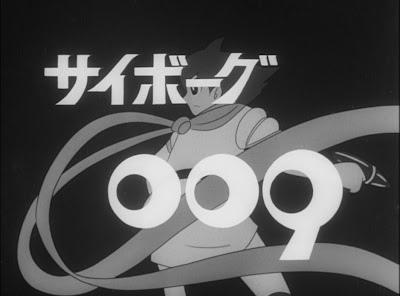 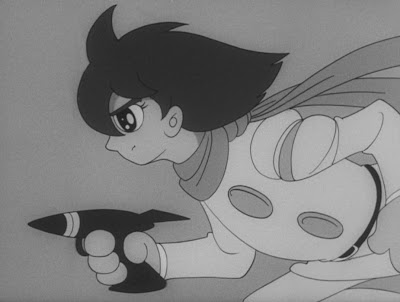 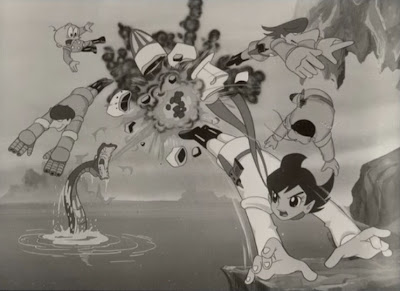 Cyborg 009 really gained popularity with the release of Toei Productions two color theatrical films, CYBORG 009 (1966) and CYBORG 009: KAIJU DAISENSO (1967). The success of the two films led the way for a brand new 26 episode black and white TV series. The original manga is pretty grim and adult themed, but the TV series was geared towards kids. Each episode was a self contained story, instead of one running the length of the series. Most of the stories were new ones written just for the TV show, along with a few from the latter part of the first manga series. So the hardcore fans of the manga were not disappointed, a couple episodes even had stories with the Skull and Black Ghost. Cyborg 009 has all of the elements of the black and white era of anime, fast paced action, laser guns, rampaging robots, ferocious dinosaurs and arrogant villains. 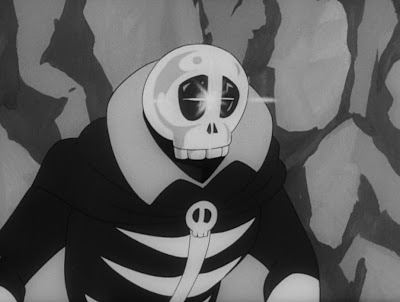 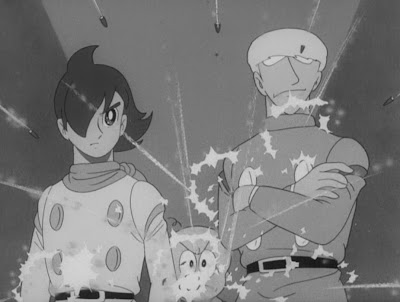 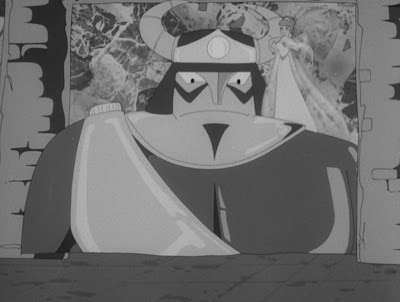 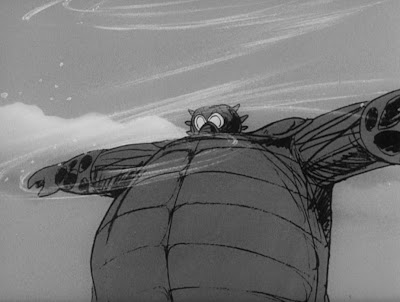 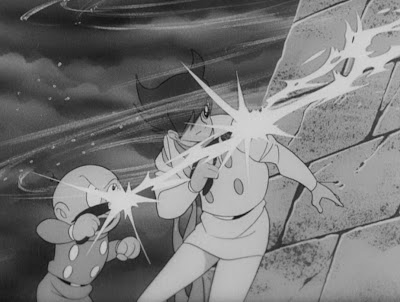 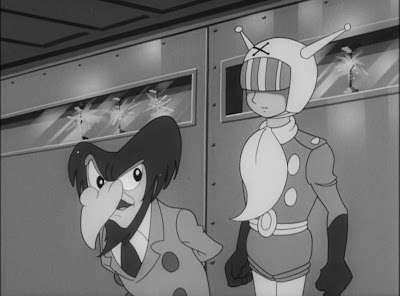 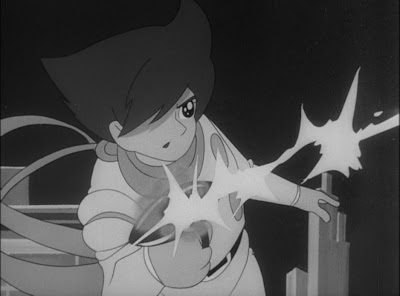 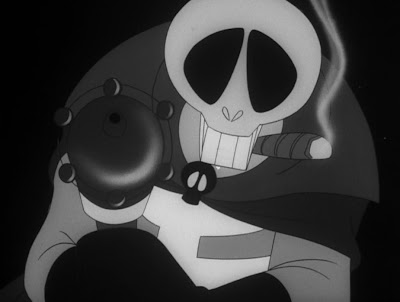 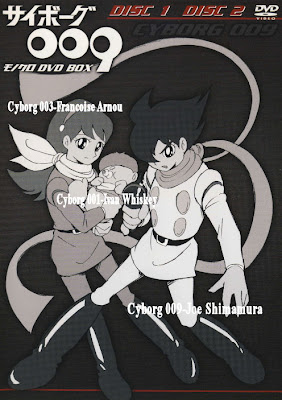 Joe was a juvenile delinquent who escapes from a boy’s home, but is then captured by Black Ghost. Joe’s Cyborg ability is an upgrade of 002’s acceleration module, he is now able to move at speeds beyond comprehension. With his strong personality, Joe takes the role of leader of the 00 Cyborgs. In the manga story arc “The Underground Empire of Hades” Joe becomes a famous race car driver "Hurricane Joe".

Francoise was a famous ballet dancer in France, until Black Ghost kidnapped her. She was given super hearing and sight. This allows her to hear and see enemies from long distances. Most of the time she takes care of 001, but will go into battle if needed.

An ill Russian infant Black Ghost performs surgery on to give him a super enhanced brain. Ivan, with a mind that processes like that of an adult, now has ESP, telekinesis, and telepathy. Ivan is one of the most important members of the group. He keeps the Cyborgs together and out of tight spots, using his abilities. 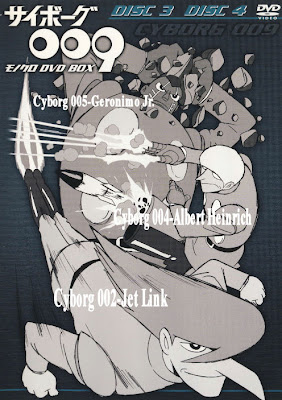 Geronimo Jr. is a Native American, tired of being looked down on and stereo-typed. Desperate for employment he accepts a job from Black Ghost not realizing their intent. G-Junior is given super strength and armor-like skin. He can now throw tanks like they are empty cardboard boxes.

Albert Heinrich’s fiancée is murdered by soldiers while trying to escape from West Berlin, disguised as circus performers. The injured Albert is taken away by members of Black Ghost to be the next human enhanced. Albert has an array of weapons installed in him, including finger guns, missiles from his knees, and a hand that can cut like a knife.

Originally a juvenile delinquent gang member from New York, Jet is captured by Black Ghost after a stabbing incident. Jet has rockets installed in his legs allowing him to fly at mach 5 speed. He also has an acceleration module installed in him as well, so he is able to move at lightning speed. 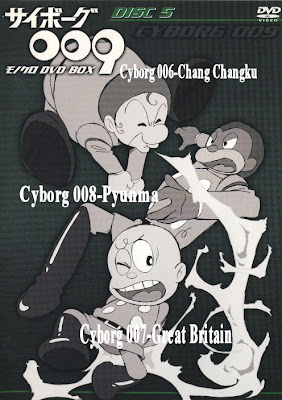 Chang was a penniless Chinese farmer starving and ready to give up on his life. Black Ghost stepped in and took him away to be apart of the 00 Cyborg program. Chang is now able to breath fire hot enough to even melt rock and burrow tunnels underground. On the side, he is a master of the culinary arts and cooks for his fellow Cyborg friends.

In Africa, Pyunma and his tribesman are captured by slave drivers. While trying to escape, Black Ghost kills the slave drivers and takes him away. Pyunma has artificial lungs installed which enables him to submerge himself underwater for long periods of time. This ability comes in handy when engaging nuclear submarines and cybernetic dolphins.

Great Britain was a famous British actor whose financial problems draw him to the bottle. Black Ghost takes advantage of his fall from stardom to add him to the Cyborg program. Great Britain becomes the ultimate shape shifter, able to transform into any object, animal, or resemble any person. In the animated version he’s a kid and is used comedy relief.