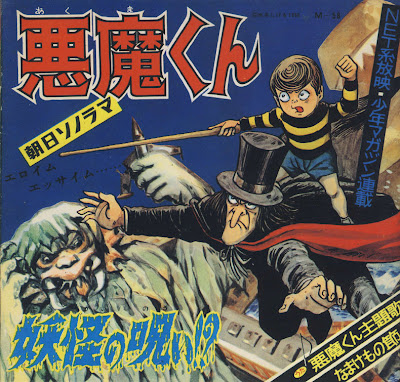 1966 was a great year for Japanese children’s television. With the “Kaiju Boom” moving full steam ahead, there was still room for other memorable tokusatsu and anime. Shigeru Mizuki’s super popular ghost and goblin manga GEGEGE NO KITARO was already spooking millions of readers, thus creating the “Yokai Boom”. However, this was not the only work by Mizuki that got attention. In October 1966, Toei Prod. rolled the cameras for a live action version of Mizuki’s supernatural story Akuma Kun (Devil Boy) which ran simultaneously with the manga in Shonen Magazine. The black and white TV series ran for 26 episodes and starred Mitsunobu Kaneko (GIANT ROBO) who was also Johnny Sokko. 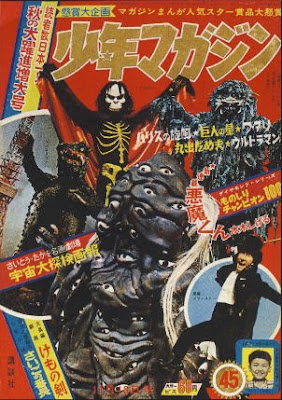 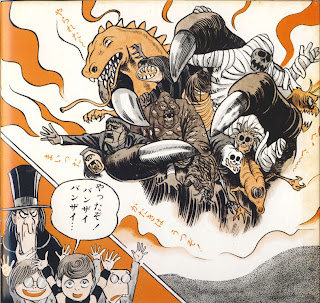 Akuma Kun starts out with a funeral in procession under a dark, ominous sky. The back doors of the hearse suddenly open and the casket comes crashing out. Before the eyes of the horrified mourners, the casket opens and the body rises, then floats away into the forest. Later a group a boys come upon the lifeless body now devoid of eyes. Only one boy Shingo Yamada (Mitsunobu Kaneko) seems unafraid and intent on finding the answer to this strange mystery. Looking around, he sees an old man watching nearby in the woods. The strange man turns and walks slowly away almost beckoning Shingo to follow. Shingo is led to an old abandoned well in the middle of nowhere. The old man becomes a glowing figure and floats into the well. Shingo, now convinced the old man is behind the strange happenings, follows the old man down the dark well. Exploring a maze of underground passages, Shingo comes upon a large room. A shaft of light points down to a giant circular stone slab, with strange hieroglyphic-like writings and numbers on it. The old man steps out of the shadows and introduces himself as Doctor Faust, assuring Shingo he will not harm him. Faust explains that he has spent hundreds of years, guarding against the appearance of demons in our world, which he fears has already begun. Faust takes Shingo to a baptismal-like font, then begins to play a hypnotic melody on magical instrument known as Solomon’s flute. 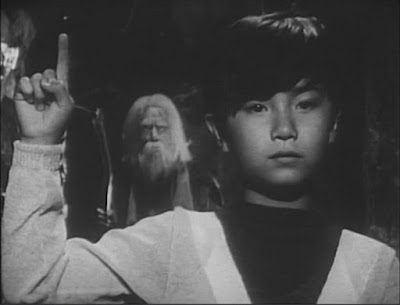 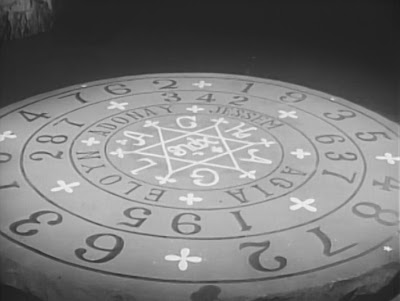 Images of demons and spirits begin to ripple through the water, among them is the creature responsible for the corpse, the eye stealing demon, Ganma. Shingo, still unafraid, realizes his whole life is about to change. Faust brushes Shingo’s hair to one side revealing a birthmark. This is the mark of Shingo’s destiny, to step in and protect the world as a demon fighter. Knowing his life is in it’s last hours, Faust dedicates his remaining time on earth to show Shingo how to summon the only being that can help save humanity. 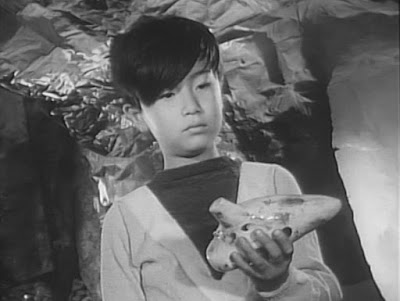 The surprise is that this savior just so happens to be a devil. Materializing at the spoken word of Faust, which is repeated by Shingo, Meliesdes Niche Mephisto (Yoshio Yoshida) steps out of the stone circle, which is now revealed to be a gateway to hell. Joining forces seems to be a doomed idea from the start, since Mephisto arrogantly refuses to have any part of saving the human race from demons. Only by signing a contract, Mephisto can be used to battle against this threat to humanity. Mephisto almost succeeds in eluding this request, by attempting to tear the document in half. Faust quickly plays the magic flute, causing great pain to the snobbish pointy nosed devil. Faust releases Mephisto from his agony only after he signs the contract. Shingo is now handed the flute and is advised to keep a watchful eye on his devil companion. Faust’s time has now ended and fades away into thin air. Aware of the dangerous task ahead Shingo and Mephisto fly off to stop the demon Ganma. 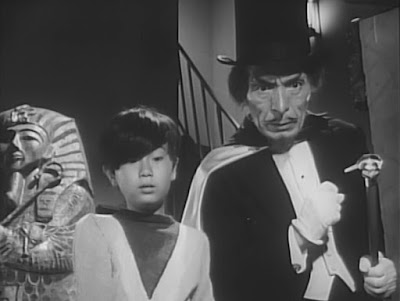 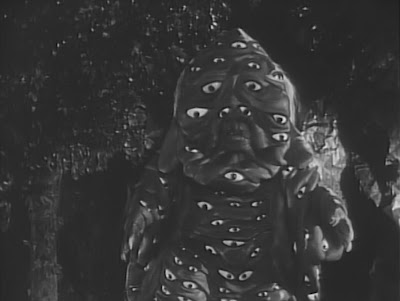 Mephisto doesn’t fit the look of your traditional devil, red, horns, pitchfork, etc. Instead he is quite the gentlemen, dressed in a tuxedo, top hat, and cape. The only thing unusual is the bump on top of his head that radiates with pain when he is being punished by the melody of the flute. Mephisto is armed with a jewel capped cane that can be transformed into sword, drill, and even a flame thrower, The cane can also warp time, magnify energy from the sun, and also can give the power of flight. Unfortunately, the pointy nosed devil would rather be chasing women than saving the world. Instead of using the flute, sometimes Shingo would use Mephisto’s passion for chocolate or a magazine of bathing beauties to steer him in the right direction. In episode 10 “Daimajin of Shiba”, Mephisto is summoned back to hell, a request that he is unable to deny. Mephisto decides to let his younger brother, Shira Sultan Mometto Mephisto, take over in his place. The brothers reunite later in the series. 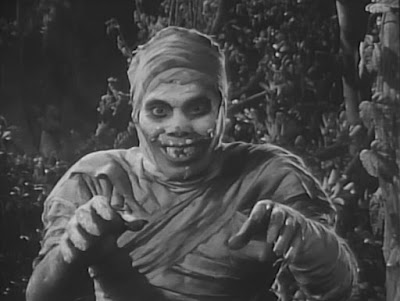 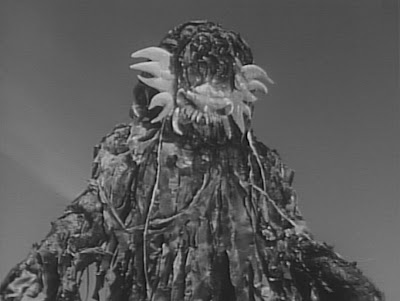 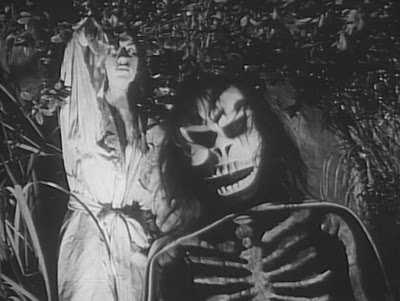 Akuma Kun is rich in memorable visuals and atmosphere. Being black and white adds to this sense. Whether it’s ghosts, ghoulish mummies, or the woman of the snows, embracing her helpless victim in her arctic clutches, the show has a creepiness reminiscent of silent era horror. The soundtrack is primarily jazz oriented which gives a cool vibe. Other tracks include everything from electric guitar to ghostly chants (apparent in the opening credits). The special effects and monster suits are outstanding for their time. The multi-eyed demon Ganma in episode 1 is a good example of Akuma Kun‘s uniqueness . Akuma Kun is a monochrome gem, surely to please any kaiju fan. 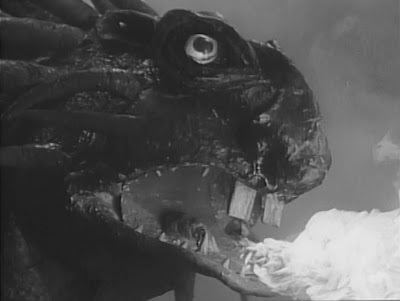 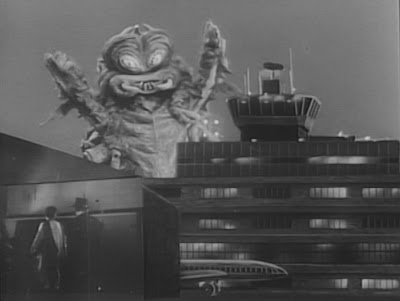 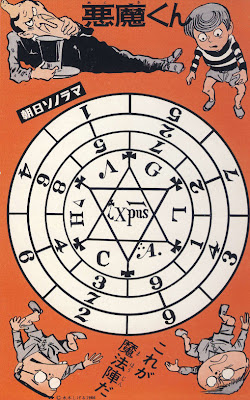