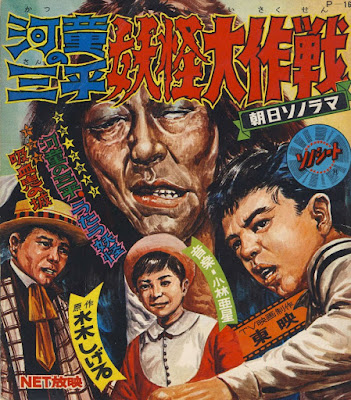 Manga artist Shigeru Mizuki already started interest in the Yokai/ghost genre with his beautifully drawn horror manga/comics which began in late 1950’s and through out the 1960’s. Popularity picked up in 1966 with the release of AKUMA KUN a live action TV series produced by Toei Productions and based on Mizuki‘s manga. 1968 would change everything and be considered the year of the Yokai in Japan. Now with the “Yokai Boom” in full swing, fans would get their fulfillment of ghostly anime and feature films. Daiei released the first two theatrical features in their Yokai trilogy, 100 MONSTERS and THE GREAT YOKAI WAR, Daichi Doga added an anime TV series YOKAI NINGEN BEMU, and finally Toei’s animated version of Mizuki’s manga GEGEGE NO KITARO hit the airwaves. Toei Productions also added one more live action feature to the mix as well, KAPPA NO SANPEI: YOKAI DAISAKUSEN (SANPEI THE KAPPA: THE GREAT GHOST STRATEGY). 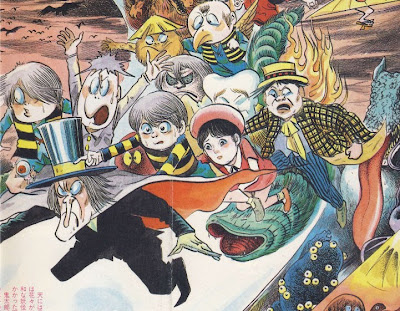 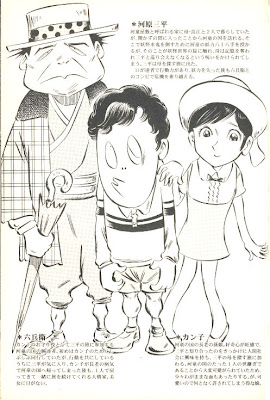 Kappa no Sanpei begins with a young boy Sanpei Kawahara (Yoshinobu Kaneko)(AKA KAGE, WATARI) and his two friends exploring the attic of his house. The three come upon a museum-like room full of creepy artifacts, taxidermies and a statue that resembles a mythological water creature known as a Kappa . The Kappa is holding a scroll that mentions the Kawamura family name which puzzles Sanpei. Soon they are drawn to a door in the room which opens, to reveal a stairway leading downward into darkness. Sanpei begins to go down the steps when they suddenly disappear and he falls into a dark abyss leaving his friends behind. 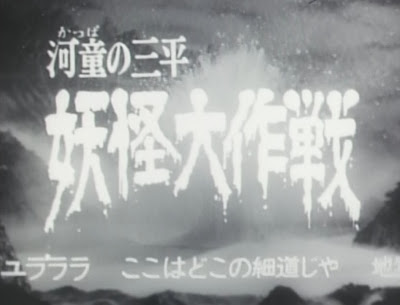 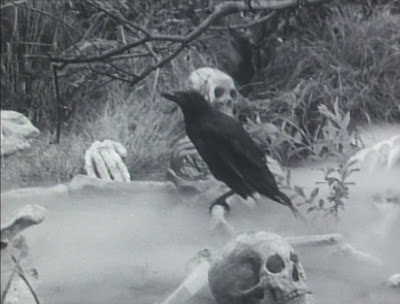 Sanpei lands in a swampy wetland where a giant gillman-like hand grabs him and takes him away. He awakens on a stone slab surrounded by strange people who seem not to happy he is there. Soon Sanpei realizes he’s in the ancient forbidden country of the Kappa who despise humans for driving their race into hiding. The Elder Kappa sends Sanpei to be sacrificed, when a huge tree monster Mizu-Oni (Water Demon) suddenly rises out of the ground. Mizu-Oni attacks the Kappa temple grabbing it’s people with long tentacle-like branches, draining the water from their bodies which is the life-blood of a Kappa and leaves them as dried up carcasses. 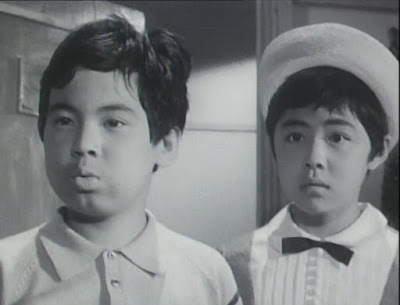 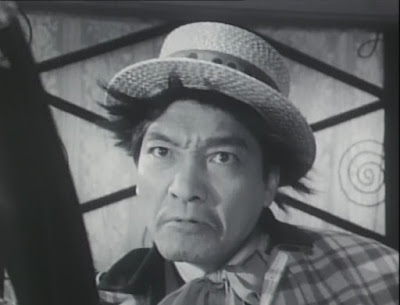 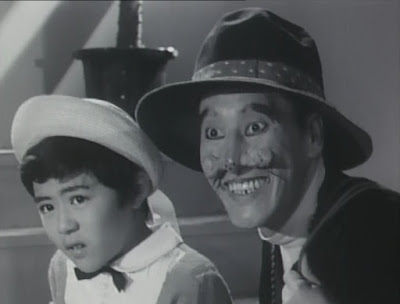 The Mizu-Oni grabs a young Kappa princess Kan (Matsui Yachie)(THE SNAKE GIRL AND THE SILVER-HAIRED WITCH) and takes her away. Sanpei goes to the Elder Kappa with Kan’s guardian Rokubee (Fuyukichi Machi)(AKA KAGE, HENSHIN NINJA ARASHI) and offers to help. Elder Kappa lets Sanpei return to his house to get matches to burn Mizu-Oni. When Sanpei returns home he runs into a weird man snooping around in his house, Itachi Otoko (Weasel Man)(Ushio Kenji)(KAMEN RIDER, JAKQ DENGEKITAI VS. HIMITSU SENTAI GORANGER). Sanpei chases him out, but Itachi Otoko who is now bumming food, becomes an ally in later episodes. Sanpei quickly grabs the matches and returns to the Kappa’s temple. Before Sanpei and Rokubee leave to battle Mizu-Oni, Elder Kappa casts a spell on Sanpei which gives him the powers of a Kappa. 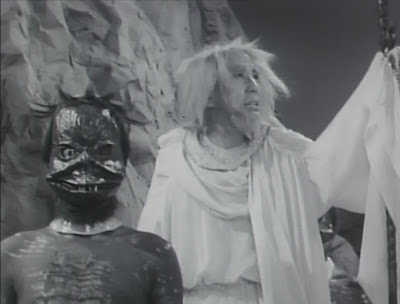 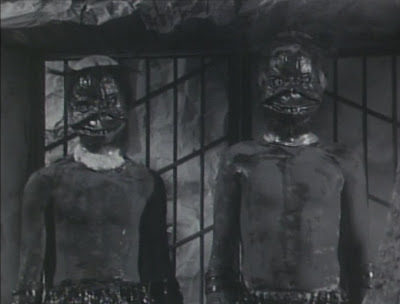 Rokubee and Sanpei finally find the monstrous tree demon. Sanpei tests his new abilities by firing off water shurikens at the behemoth with no effect. The new boy Kappa starts striking matches and can’t get one lit, while the demon closes in. One of Sanpei’s hands are touched by Mizu-Oni and it is immediately dried like that of a real Kappa. Realizing the situation has elevated from bad to worse, Rokubee makes his way to a boarded up sealed well which contains a flammable liquid. Rokubee sucks up all of the liquid until his belly looks as if he is pregnant. He runs back to aid Sanpei who is fighting alone. Rokubee lets the demon tree absorb all of the liquid from his body leaving him a dried up corpse. Finally Sanpei lights a match and throws it at Mizu-Oni, which along with the absorbed liquid from Rokubee causes it to be engulfed in flames and defeated. Sanpei soon finds Rokubee’s and Kan’s bodies, dried up and lifeless, so he throws them into a lake which replenishes their liquids and brings them back to life. Sanpei’s hand is restored too. Now that Kan is saved Sanpei is sent back home only to find Itachi Otoko again. Sanpei asks where his mother is and is told she had been taken away to the Yokai world. Throughout the 26 episode series Rokubee and Kan help Sanpei search for his mother while running into a wide variety of ghosts, demons and other hellish creatures which they must defeat. Kappa no Sanpei is another black and white classic tokusatsu show that has a fun light-hearted atmosphere along with some cool creepy yokai. The soundtrack by Asei Kobayashi is loaded with a very effectively used theremin to add that horror vibe. 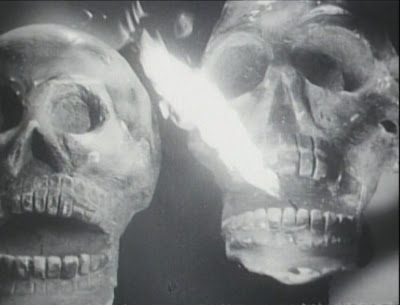 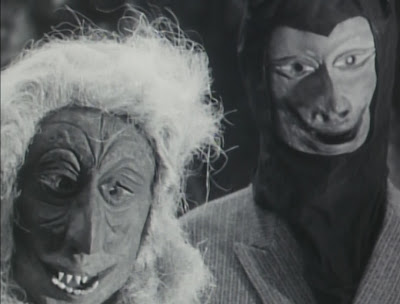 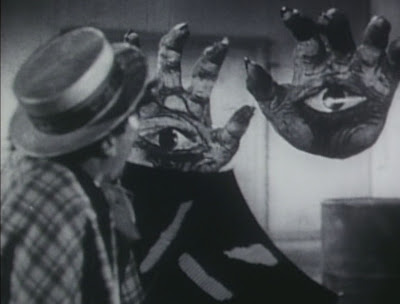 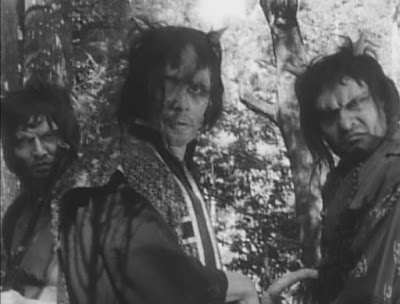 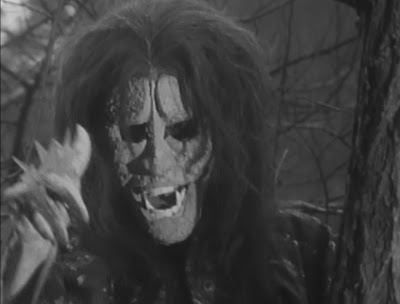 Kappa are supernatural creatures which live both on land and in water. They are as tall as a four or five year old child. They have a beak-like snout, and fins on their hands and feet. They also have a shell on their back, and a water-filled dish on their head. As long as the dish is full of water, kappa keep their supernatural powers. Although kappa harm people sometimes, there are also many tales where they have helped people. They are very curious. They often appear in cartoons because of their lovable images. Kappa love sumo wrestling and cucumbers. That is why cucumber sushi rolls are called "kappa maki". "Okappa" are bobbed hairstyles because they look like the kappa's hairstyles. Kappa are excellent swimmers. There is a saying "Kappa no kawa nagare (a drowning kappa)" which means, even an expert can make mistakes sometimes. (Kappa Intro from GoJapan.about.com) 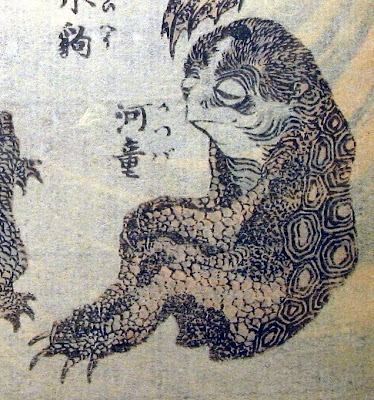 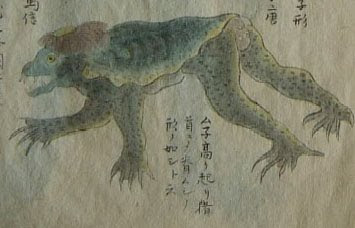