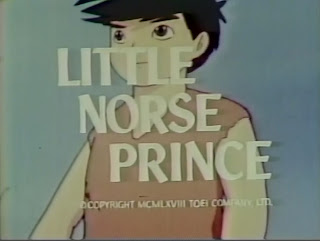 In 1958 Toei Doga produced Japan’s first color animated theatrical film, HAKUJADEN (aka THE PANDA AND THE MAGIC SERPENT). This was the start of a long series of original animation movies which let you witness the beginnings of some of the most famous creators of manga and anime. For instance Osamu Tezuka (ASTROBOY, UNICO) was brought in for Toei’s third 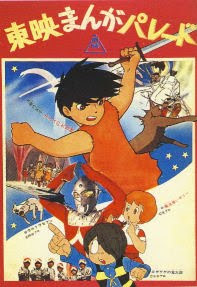 feature SAIYUKI (aka ALAKAZAM THE GREAT) and Shotaro Ishinomori (KAMEN RIDER, KIKAIDER) for a double dose of CYBORG 009 along with SORA TOBU YUREISEN (aka THE FLYING GHOST SHIP). But none would compare to the 1968 feature TAIYO NO OUJI HORUS NO DAIBOUKEN (aka LITTLE NORSE PRINCE). This would mark the first collaboration of the most famous anime director in Japan, Isao Takahata along with the founder of the future Studio Ghibli (MY NEIGHBOR TOTORO, PONYO), Hayao Miyazaki, Hiroshi Okawa legendary producer and Yasuo Otsuka as animation director. LITTLE NORSE PRINCE surpassed any animation of it’s time, including the serious tone of it’s story reflecting labor disputes within Toei during it’s production. Because of the problems it was not supported at the box office during it’s first run, but was re-released as part of Toei’s Manga Parade, along with GEGEGE NO KITARO, ULTRA 7, and SALLY THE WITCH. LITTLE NORSE PRINCE is now considered a masterpiece in the a 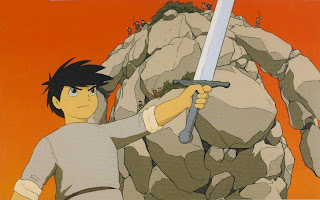 nimation community.
LITTLE NORSE PRINCE begins with Hols (aka Horus) fighting a pack of silver wolves in a northern part of Europe. Hols is armed with an axe on a short handle attached to a rope, very similar to the character in Toei’s live action film DAI NINJUTSU EIGA WATARI. This scene pulls you right in due to the very fluid animation and detail. During the fight a giant stone figure rises out of the earth, with a deep commanding voice, “Who dares disturb mighty Rockor!”. Rockor (aka Moog) is the man of the mountains, made of boulders and trees with a god-like presence. Hols explains it was the silver wolves who disturbed his sleep. Realizing the source of the disturbance, Rockor acknowledges the presence of Grunwald the Frost King. Rockor then complains about a pain in his shoulder, in turn Hols easily scales the mountain man to find the problem. Hols discovers Rockor’s ache is actually a sword stuck into the groggy giant’s shoulder. Hols removes the sword from Rockor’s shoulder and is told that it’s not just any sword, but the Sword of the Sun. The sword is worn and dull and needs sharpening. Rockor tells Hols if he sharpens the sword, the mighty mountain man will come see it for himself. On that day when the sword is sharpened, Hols will be known as “Prince of the Sun“. Hols soon runs home to see his ailing father. On his death bed the young boy’s father explains to Hols about how th 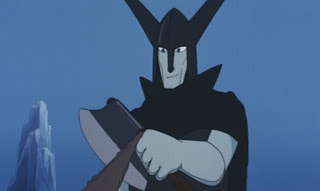 ey fled their village when he was a baby to escape Grunwald’s attack and spare them a life of misery under the Frost King’s rule. Now Hols is told he must go back to the village and be with the people where he would not be lonely. Hols sets sail due north with his bear cub pal, Koro to find the village. The two friends finally find land and are soon are attacked by giant black eagles that separate them and carries Hols off into the mountains. One of the giant feathered monstrosities drops Hols in mid-air to his death, but he saves himself with his trusty axe and starts scaling the mountain with the rope attached to it. Hols finally makes it to the top edge of the huge cliff only to find the other end of his rope is being held by the Frost King himself, Grunwald. In a very intense scene, Grunwald asks Hols to be his ward while the puzzled boy is teetering on the edge of the cliff. Hols of course declines because he was told by his father, Grunwald bur

ned down his village. Grunwald lets go of the rope and Hols is sent plunging towards death off the mountain side. Luckily Hols ends up plunging in to a river and floats down to a near by fishing village. The people welcome him with open arms, but you soon find out darkness hovers over the villagers heads. There had been no fish run in ages due to a giant pike Grunwald unleashed to starve the people. The brave Hols sets out to get the giant fish who also murdered villagers who tried to capture it. In a thrilling battle Hols is almost drowned and beaten, but mana 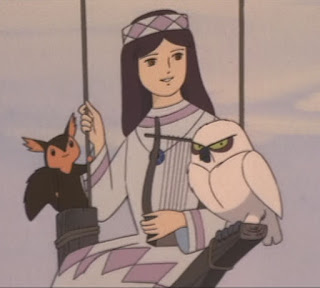 ges to kill the monster pike. The end of Grunwald’s demon fish allowed for a huge fish run and happiness ran through the village once again. With the loud cheering and song, Coro finds the village and is reunited with Hols. The laughter soon ends when a huge pack of silver wolves invade the village and destroy the days catch. Hols follows the damned beasts deep into the woods only to find a flooded and abandoned village. In the village Hols finds a lonely girl named Hilda along with her animal friends Chiro, a squirrel and Toto (aka Tata) an owl. Hilda says the monster destroyed her village and she is the only survivor, since then she has been under Grunwald’s spell. Hols takes Hilda back to his newly adopted village where she entertains the people with her beautiful, mesmerizing singing voice. The plot thickens as we find that Hilda shies away from the unsharpened Sword of the Sun and she becomes very short with Hols upon speaking with him. Grunwald reveals Hilda is his sister and orders Toto to aid her in turning the villagers against Hols, for he is

the Frost King’s biggest threat. Hilda also takes advantage of a disgruntled villager named Drago to aid her in her cause. Hilda is conflicted inside with her destructive directive, since the villagers showed her what life can really be like and what could be happiness in her future, including marriage. Hilda instead gets angry, for this could not possibly happen to the sister of the Frost King, so she sends a horde of rats to overrun the village. Soon Hilda convinces the innocent minded villagers that all of the bad luck that they have been suffering is because of Hols, who is stoned by the villagers, and then chased from his new found home. The conflict in Hilda’s heart thickens when Toto is ready to make the final strike on the village but she wants to spare a little girl Mauni’s lif 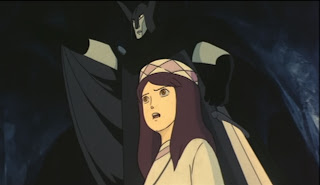 e. Hilda is then torn when Toto reminds her that she wears the Medal of Life that gives her immortality. She then accepts her doomed life and sets out for the destruction of Hols. Hilda finally confronts Hols and reveals her dark secret to him that she is sister of the Frost King sent to destroy man. Hols is shoved off a cliff into the Lost Woods where he is left to die. Resenting what she has done, Hilda tells Grunwald she will no longer aid him in the attack on mankind and leaves to live at the Frozen Lake alone. Grunwald soon unleashes frozen hell on the villagers with a pack of silver wolves and an ice storm, but they retaliate by building a giant fire to protect their homes. Back 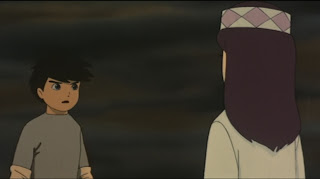 in the Lost Woods Hols is being haunted by visions of circumstances leading to his discovery of Hilda being Grunwald’s sister. Suddenly a bright light grabs his attention and he is led out of the woods by the power of the Sword of the Sun. Hilda meets Hols at the end of the woods and says farewell and warns him of Grunwald’s attack on the village. Along with the silver wolves, a giant ice mammoth emerges to lessen the villagers chance of survival. The villagers exhausted, cry out what could they possibly do, what kind of weapon could defeat the king of the frost. Hols arrives and says “the Sword of the Sun!!”, so everyone pitches in to harden the sword in the giant fire made to protect the village. Meanw

hile a young boy Frepp and Koro get lost in the storm looking for Hols, but they run into Hilda instead. Knowing they wouldn’t survive in the storm with the silver wolves in the area, she gives them her Medal of Life which flies them back to the village. There Hilda stays, where she lets herself get beaten unconscious by the silver wolves. Now that the Sword of the Sun is finished, Hols engages in battle with Grunwald. Just as promised Rockor arrives to see the Swo

rd of the Sun. Frepp and Koro safely return and give Hols, Hilda’s Medal of Life. In turn, Grunwald realizes he has been betrayed and flees back to his frozen castle. Rockor takes care of the frozen pachyderm while Hols and the villagers pursue Grundwald. Inside his the frozen lair, Grunwald and Hols go head to head. Rockor arrives and knocks out the side of the 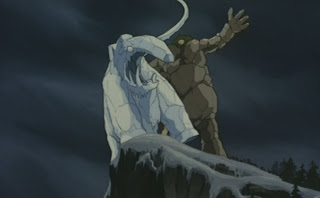 castle, and sunlight comes blazing in to give energy to the Sword of Sun. This unites the villagers who start chanting Sun! Sun! Sun!. Hols finally strikes down the mighty Frost King and sinks his castle into the abyss. Hols realizes the Metal of Life is gone as well. Hilda awakens finding she is still alive without the Metal of Life so she returns to the village. Hols sees Hilda and welcomes her back home where she can now live like a normal human girl with him and the villagers happily.

The first time I saw this unbelievable film was in the early 80’s. Okay here’s a good example of how big of a geek I am. I noticed after school one day a new UHF station started in the Chicagoland area, WPWR-60. Their normal programming didn’t start yet so they were broadcasting cartoons all day long instead. They were showing toons I hadn’t seen in years like Toei’s KING KONG among others. I said to myself, “I can’t miss any of this!!!”, so the next morning cough cough, and I was home from school watching cartoons all day. Well that’s when LITTLE NORSE PRINCE was shown and blew me away.

The story and characters were like no other cartoon I’ve ever seen. Everything in this film is about being positive, beating the odds, never giving up, and most important the power of the sun. Dubbed by Titan Prod., released by American International Pictures, and yes you would recognize the voice actors, basically all SPEED RACER alumni, like Corinne Orr. The beautiful songs were sung by none other than Adryan Russ, the Save the Earth, GODZILLA VS. THE SMOG MONSTER girl. I can now watch this movie crystal clear with subtitles, but nothing beats an AIP release and UHF grain. 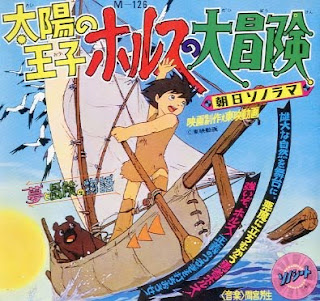