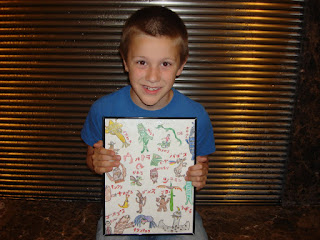 Like myself, my son Christian loves monster movies, especially Japanese ones. His devotion to his hobby amazes my friends and I. Christian knows all the monster names and even the episode numbers to where the giant behemoths appeared in their respective TV series.
This summer I took Christian to G-Fest 2009, a convention devoted to Godzilla movies in Chicago. The funny thing is Christian is not really into Godzilla, but this kid loves Ultraman and all of the monsters. This brings us to this years guest of honor at the fest, Kenji Sahara. Mr. Sahara is the John Wayne of Japanese Monster movies. He's best known for his brilliant performance in Rodan, the Flying Monster (1956) and several Godzilla films. My personal favorites are Frankenstein Conquers the World and Son of 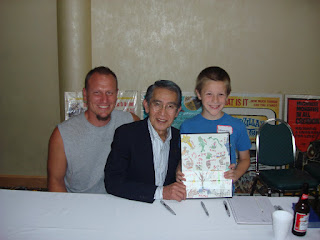 Godzilla. Mr. Sahara also starred in Tsuuraya's 1966 TV series Ultra Q. This program was the predecessor to Ultraman. Ultra Q was a half hour black and white TV program similar to the Outer Limits except with giant monsters. Mr. Sahara played Jun Manjoume, an airplane pilot, along with Yuriko Edogawa and Ippei Togawa investigated supernatural phenomena, alien encounters, and of course giant monsters.
When I told Christian he was going to meet Mr. Sahara this summer, he was so excited. Christian and I just got done watching the whole Ultra Q series together last winter. Christian has a huge heart and is a really kind kid, and he told me "I'm going to draw a picture for Kenji!!". I was thinking tha 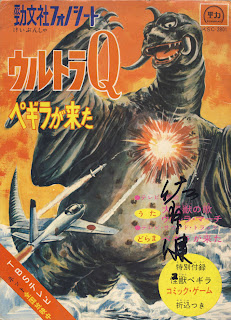 t's cool, but then he blew me away when I saw he sat and drew a picture of every monster from Ultra Q. He even drew Kenji Sahara in the picture!!!! My wife suggested we frame it before Christian presented Mr. Sahara with his gift. G-Fest arrived and Christian could not wait to meet Mr. Sahara. We got in line early, but suddenly this year the knuckle-heads who run G-Fest decided to make people draw numbers for line placement, after we were there waiting a long time and dropped us way back to 300 and something. Nice thing to do to a 7 year old. Well the long wait was completely worth it. Mr. Sahara loved Christian's picture and the fact he was into a show nobody really talks to him about. Mr. Sahara is really proud of his work in Ultra Q and was very moved by Christian's picture. Christian also got his original Ultra Q book and record signed by Mr. Sahara. The chance to meet such a legend of Japanese film is something Christian and I will treasure forever.
Believe it or not the story doesn't end there. On Tuesday I got home 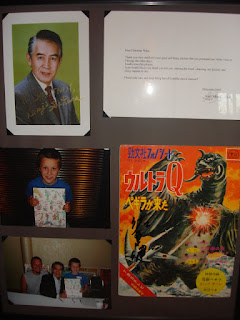 from work and checked the mail. In the mail there was a letter addressed to Christian. I'm like what's this and noticed an airmail label on it. I flipped the letter over and my eyes were as big as silver dollars, it was from Kenji Sahara!!! Holy @$%%^!!! Christian came home from school and I said "Hey buddy, you got a letter today" he said "really, from who?" with excitement. Kids do love mail. I said "I don't know what does it say?" Christian sounded out the name "Ken Ken Kenji Kenji Sah KENJI SAHARA!!!!!" Mr. Sahara sent his biggest, now 8 year old fan a very nice thank you letter and autograph picture. Watching Christian receive a letter from one of my childhood heroes couldn't have made me happier, yes my eyes got watery. All I can say is there is nothing cooler than your kid appreciating the old-school and the hard work put into our favorite classics films and TV shows that made us into Monster Kids. 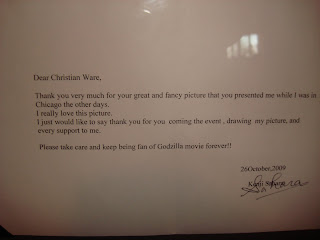 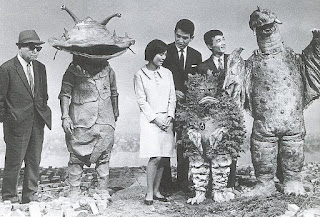