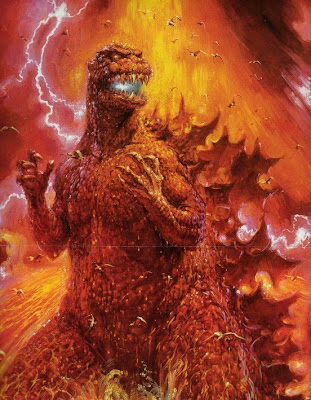 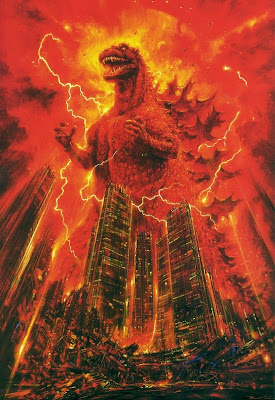 As many people know, GODZILLA: FINAL WARS (2004) will be the last Big “G” film for quite a while. When Toho finally revives everyone’s favorite monster, it will be like the Cubs winning the World Series among Godzilla fans, except the latter will actually happen. This is not the first time fans had to wait a long duration, to see the mighty monster hit the screens again. I still remember in 1978, running home from school to catch the 3:30 movie (WLS-7 Chicago) which was showing THE TERROR OF MECHAGODZILLA for the first time. As a kid you didn’t realize that this would be the last Godzilla film for a long time. I raided magazine racks at the drug store, looking for monster magazines with pictures of Godzilla, including Fangoria #1. The first issue of Fangoria had of an article on Godzilla, along with rumors for possible new movies, like GODZILLA VS. THE DEVIL and GODZILLA VS. GARGANTUA. Obviously none of these films came to be. To satisfy my hunger I discovered the Japanese Fantasy Film Journal and joined the Japanese Fantasy Film Society. In the meantime I discovered other Japanese staples of the Sci-Fi genre, like KAMEN RIDER, which I now live and breath for, and the UCHU KEIJI series. 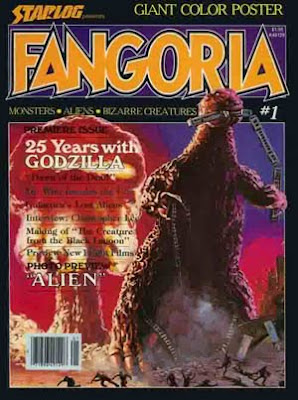 Finally in 1984, news surfaced of a new Godzilla film coming. The brand new feature would be released by New World Pictures as GODZILLA 1985. Now, there was the wait until the fall of 85’ to see the radioactive King of the Monsters once again. My local Horror Host, the SON OF SVENGOOLIE, of course played a slew of Japanese Monster movies that year, all from the AIP catalog. Best of all, Sven had a Godzilla 1985 contest, where you could win all kinds of cool Big “G” swag. All you had to do was send a postcard to WFLD 32 Chicago to win. Postcard, postcard, ah yes, I had the Fangoria postcard book which had 24 of those suckers. I had to win, so I mailed all 24, to my favorite ghoul. 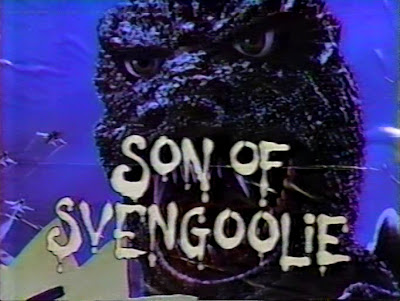 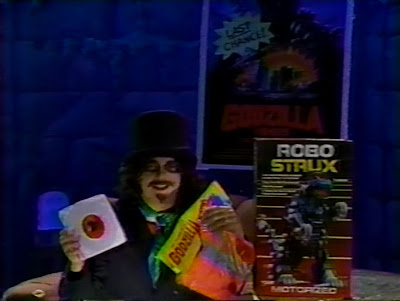 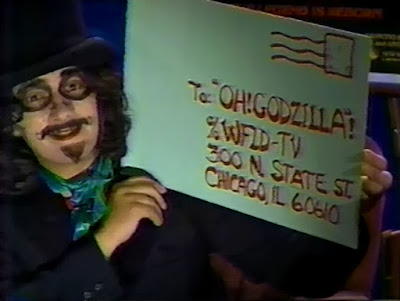 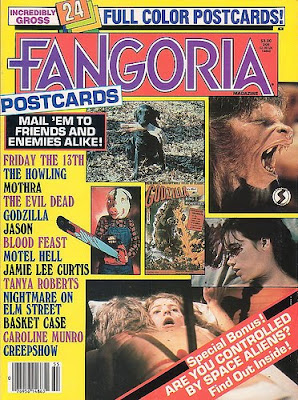 Weeks went by, until the Saturday came where they would announce the winner. Well, the Friday before the big day, I was walking home from school and my Mom was standing in front of my house waiting for me. I figured I had to go grocery shopping or something with her. She had something behind her back, I’m thinking what’s up? All of a sudden she held out a package, and I just saw the words Svengoolie and WFLD, then I knew what it was. That truly deserved a “Holy @#$#!”, think of Ralphy and his Little Orphan Annie decoder ring times 1000. I may have used the Force, because I'm sure I opened the package without touching it. There were bumper stickers, a record, a vest, free movie passes, and other promo items. I thought wait a minute, I have to record Sven tomorrow, they’re going to announce the winners!!! It just so happens New World was in Chicago that week with a “G85” suit promoting the movie. Svengoolie was there to interview Godzilla and have him announce the lucky winners of the contest. Imagine being 15 years old and have Godzilla growl your name as it scrolled down the screen of your favorite TV show. I never did drugs, but I’m sure there’s nothing on the streets to beat that high. 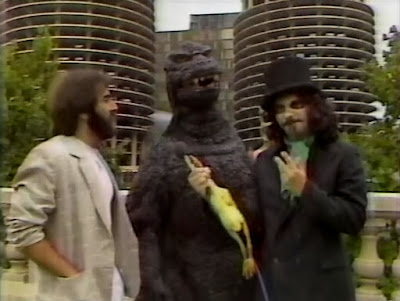 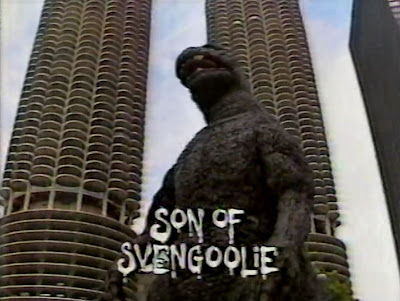 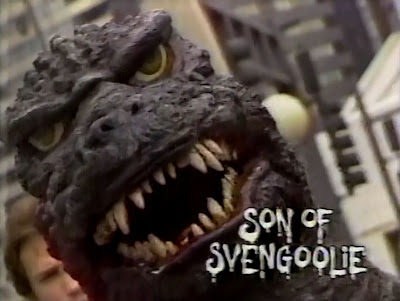 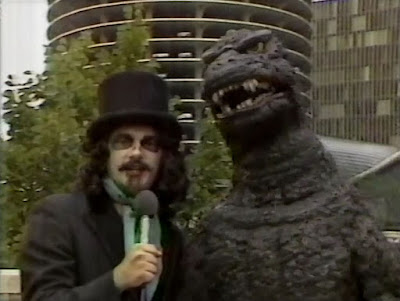 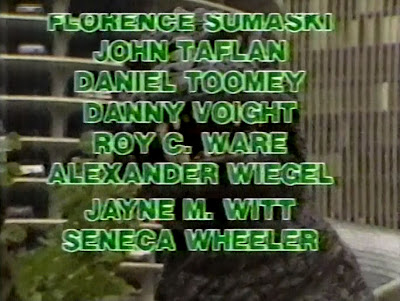 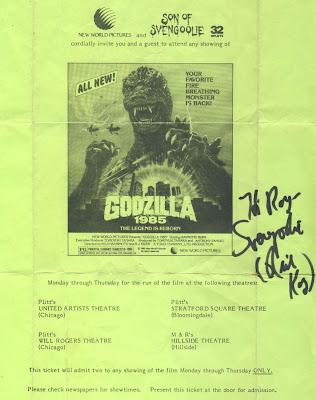 Around that time a brand new comic shop opened in my town called Graham Crackers Comics. The manager, now best friend/mentor, Frank Kurtz (http://laughingreindeer.blogspot.com, check it out!!! dammit), was a huge Godzilla fan too. He just got the huge encyclopedia we called the Toho book at the time. I never knew books like that existed. This hardbound giant had pictures of every Toho film ever made. Frank said I can get you all the Japanese books you want, and that he did. Along with Big “G” books, he was able to get me all of the Fantastic Collection Series of books which included KAMEN RIDER, SPACE SHERIFFS, SUPER SENTAI and ULTRAMAN. He also got me started on the monthly Japanese kid’s magazines TV Magazine and TV Kun, which I haven’t missed an issue in 25 years. I bought all the Godzilla 1985 books a lawn mowing maniac kid could afford, and boy I could mow a lot of lawns with that kind of incentive. I remember the movie getting bad reviews and laughs, but in my eyes, Godzilla 1985 was Oscar material. 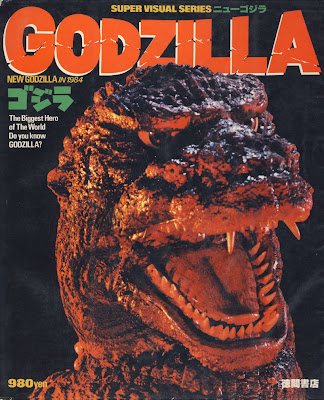 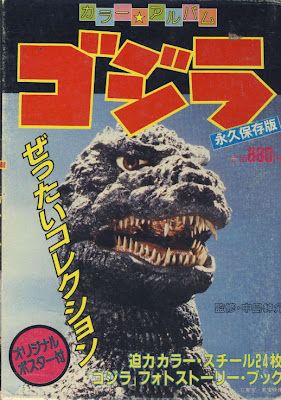 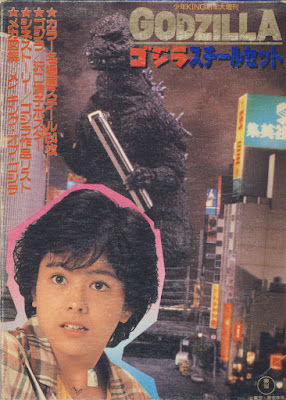 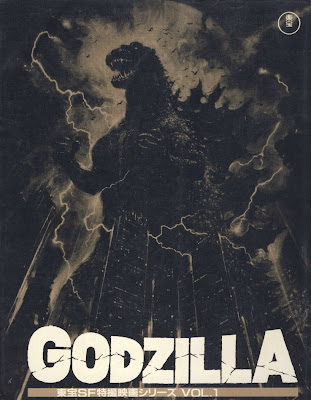 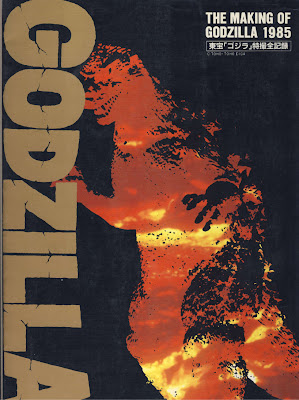