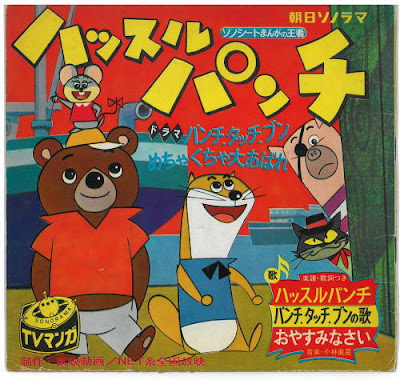 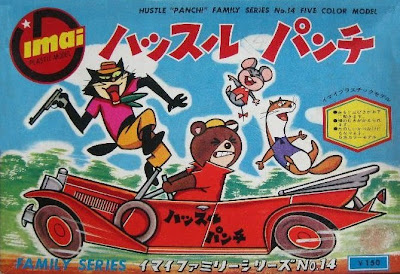 In the early 60’s Toei Doga had success with talking animal characters in their handful of theatrical features (WAN WAN CHUSHINGURA, SAIYUKI). Even though these were serious toned features, they still drew the interest of a younger audience. In 1965 Toei produced Hustle Punch, an all comedy anime more in the direction of slapstick cartoons released in the US like MERRY MELODIES, TOM AND JERRY, and TEX AVERY cartoons. This 26 episode black and white series was directed by animator/character designer Yasuji Mori (HAKUJADEN, UCHU PATROL HOPPER). Yasuji Mori is considered the “God of Animation” in Japan by his peers. After he left Toei Doga, Mori went on to be the anchor of Nippon Animation, with such hits as FUTURE BOY CONAN, DOG OF FLANDERS, and HEIDI, GIRL OF THE ALPS. 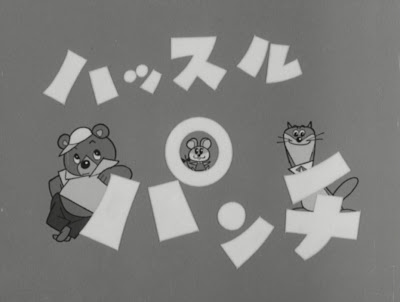 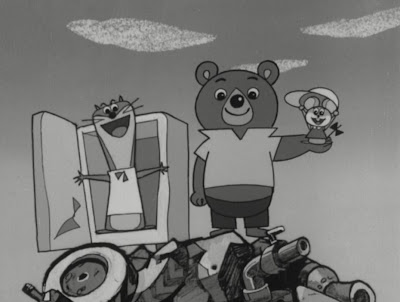 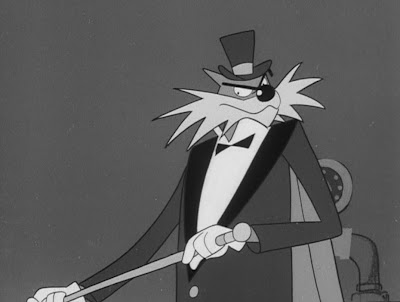 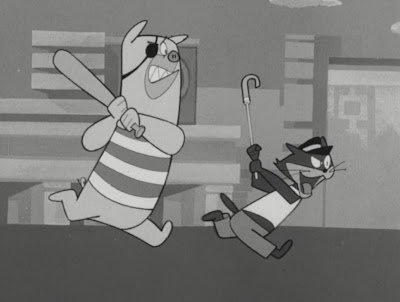 Hustle Punch follows the comedic antics of three animal friends, Punch (voice of Nobuyo Oyama)(Doraemon) a bear, Touch a mouse, and Bun a weasel. The three pals live in an old car on top of a giant junk pile in the city’s dump. In the same town, lives the cliché bad guy, Dr. Garigari a wolf, and his two minions Black, a gangster cat, and Nu, an eye patch wearing pig, who is the muscle of the group. Punch and his pals live a carefree life in the junkyard, until they have to deal Dr. Garigari and his never ending schemes to get rich. Dr. Garigari tries to steal everything from expensive jewels to a king’s royal crown. Punch and his friends take it upon themselves to foil Garigari’s plans from episode to episode. Garigari orders Black and Nu to do his dirty work which ends up with them getting beat up, blown up, and embarrassed in THREE STOOGES-like situations. Even though Hustle Punch was designed to be similar to American Saturday morning cartoons, you’ll find it still has that Japanese anime flare and atmosphere. The stories are actually not dumbed down for comedic effect. Along with the chaos and goofy stuff, comes pretty fun original plots for each episode. Punch and his friends are untouchable characters. For instance, they never get hurt, always win, etc., sort of like BUGS BUNNY or JERRY THE MOUSE. When Black or Nu would hit Punch over the head, the bad guys feel the pain instead, since Punch has such a hard head. 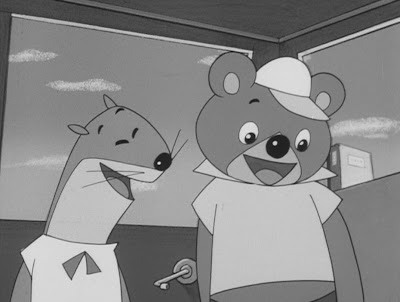 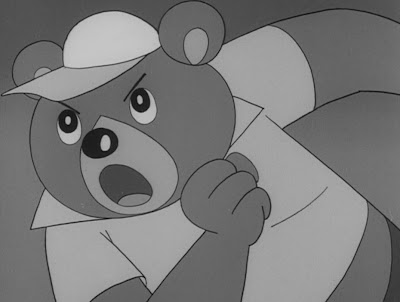 Aside from Yusuji Mori, Hustle Punch was worked on by an all-star team from the anime industry, including Hayao Miyazki and Isao Takahata, who both continued on to start Studio Ghibli. Hustle Punch also has a happy-go-lucky theme song that’s sure to drive you nuts by Asei Kobayashi (DORORON ENMA-KUN, KAGAKU NINJA-TAI GATCHAMAN). You definitely can see the wonderful character designs are very close to the ones seen later down the road in each of these creator's later projects.