WSNS Channel 44, was a local UHF station in the early 70’s. They were home to the Chicago White Sox, Blackhawks, and Bulls. Like most kids when you come home from school (me 2nd grade then), I turned on the television to watch cartoons. I would usually catch Speed Racer, Prince Planet, or Hercules. One day that all changed, the cartoons were not o 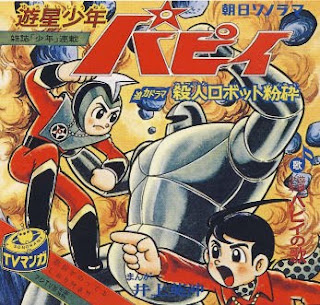 n when I came home. Instead there was a live action show (?). I saw a giant robot with long golden hair and big antennas on his head. I watched and holy crap he changed into a rocket and he’s fighting, ah yes my new love GIANT MONSTERS!!!! Yep this was Goldar the Space Avenger in Space Giants. Later that week there was other shows just like it, Johnny Sokko and his Flying Robot, and Ultraman. For these groundbreaking Japanese TV shows there were no books, no reference, no toys available in my area, but I could draw. For weeks and weeks I drew every single monster I saw so I would never forget that daily treat of sweet foam rubber. Of course I wasn’t the only one in my small Mayberry-like neighborhood who experienced this. Soon everyone followed my lead and had their own hand drawn Monster Books. Even my Mom’s best friends daughter was sucked in. These were some of my best childhood memories, everyday seemed like it was sunny and alive. I still live my life grasping and obtaining those positive feelings as much as possible. I’m extremely blessed to have like 8 best friends who are just as corrupted as me and grew up the same way and share this madness with me.
SPACE GIANTS
Bum Bum Bum BumBumBumBumBum…. “From the far reaches of Outer Space comes a threat to Planet Earth.” That was, along with some cool music, the opening to Space Giants. Created by Japanese manga artists Osamu Tezuka (best known for Tetsuwan Atom/Astro Boy), Magma Taishi (Ambassador 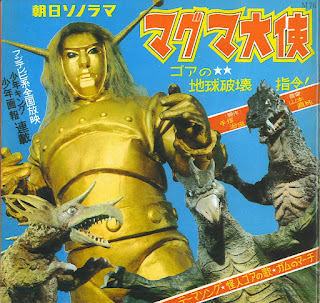 Magma) told the story of a robot family who protected Earth from the alien invader Goa. In 1966 the popular manga was created into a live action TV series by P-Productions in Japan. Of course by the time it made it stateside the title was changed and some names as well.
A young boy Miko and his father Mura, a news reporter are contacted by the evil planet conqueror Rodak to spread the word of his arrival on Earth, and his plans for conquest. Miko meets Goldar the Space Avenger who takes him to his base inside a volcano to meet his robot family and Mathusum his creator. They review pictures Miko took with his camera and acknowledge the sudden appearance of Rodak on Earth. Miko is given a rocket shaped whistle to summon anyone in the rocket family if Rodak makes his move and his threats prove to be true. He blew the whistle once for Gam (Goldar’s son), twice for Silvar (Goldar’s wife), and three times for Goldar himself. Rodak attacked the Earth (Japan) with giant space monsters every week. Every episode had pretty intense drama, and you really felt like Rodak was a real threat. My favorite part of Space Giants were probably the fights Miko and Gam would have against Rodak’s henchmen, the Lugo-Men. Gam would fire laser blasts from his helmet antennae and it would melt the Lugo-Men into a jelly-like substance. I really dug the background music "Gam's Song" for those sequences .
JOHNNY SOKKO AND HIS FLYING ROBOT
“Come on Giant Robot!!!!” is what you heard kids in in my neighborhood shout into their wrist watches, mimicking Johnny Sokko calling his Giant Robot. Mitsuteru Yokoyama manga artist and creator of Gigantor (Tetsujin 28) jumped into the live action game when Toei Productions produced a 26 episode television series of Giant Robo. Of course we were served it in the States as Johnny Sokko and his Flying Robot. The story begins with the full on invasion of Earth by the Gargoyle Gang (Big Fire in Japan) led by the Emperor Guillotine. Meanwhile Jo 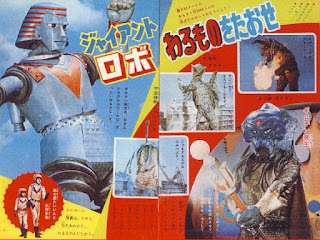 hnny Sokko is befriended by Jerry Mano who he meets on a cruise liner. Jerry is a secret member of the Unicorn Agency who is basically an Interpol like organization who deals with the constant terrorist attacks by Gargoyle. Jerry is investigating the disappearance of ships in the area. The cruise liner is soon attacked and sunk by a giant monster Draculon. Johnny and Jerry wash ashore of a deserted island that ends up being a Gargoyle base. The two quickly discover the Gargoyles have had a giant robot built to take over the world. Johnny mistakenly shouts a command into the robot’s controller, a special wrist watch, which gives him sole command of the metal titan by being the first voice recorded into Giant Robot’s brain. Johnny becomes a Unicorn Agent and uses Giant Robot in every episode to destroy the Gargoyle Gang’s evil space monsters. This show has one of my favorite dubs. At some points you forget this was originally in Japanese. The voice actors were perfect castings. The soundtrack is very jazzy and Bond-ish at times. Giant Robo also spawned two anime mini series as well.
ULTRAMAN
Created by the Toho (the Godzilla guys) special effects pioneer Eiji Tsuburaya, Ultraman is Japan’s equivalent to our American Superman. Responding to a UFO sighting the Science Patrol, a specialized police force with high-tech weaponry, investigates the phenomenon. One of two of the UFO’s reveals a giant space monster Bemular. The other UFO crashes into Science Patrol member Hayata‘s jet. The mystical silver and red alien inside merges consciences with Hayata to save his life. Hayata is given a device called a Beta Capsule which allows him to transform into the giant hero to fight aliens and giant monsters. When Hayata becomes Ultraman, he has a limited amount of time to fight. Attached to Ultraman’s chest is the color-timer which signals Ultraman when he is 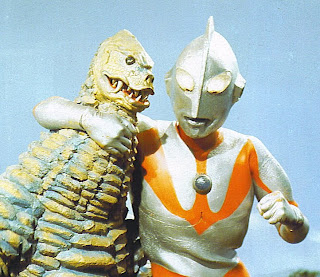 running low on solar energy. Most of the monsters in Ultraman were just as popular as the hero himself. One such is Gomora, a two part episode, is star of his own series, Ultra Galaxy. Ultraman became the standard in giant hero/monster television shows which spawned several sequels and copycats.
Ultraman was actually the second Ultra series Tsuburaya Productions unleashed on the masses. The first was Ultra Q, a hero-less series that followed three news reporters that investigated strange happenings including alien invasions, giant monsters on the loose, and the supernatural. If you like the Outer Limits, you’ll really dig Ultra Q. Shot in glorious black and white.
Posted by Shonen King at 5:49 PM